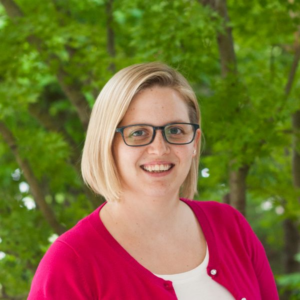 Lucy Bennett is a parent to a truck-obsessed two year old, and the Marketing and Communications Director for Arbor Montessori School, a flagship for Montessori education in the Atlanta area. She loves making things, telling stories, and building communities.

After using Notion for taking notes during Dungeons and Dragons sessions, Lucy started looking for examples of bringing a paper bullet journal into a Notion workspace. She found herself down a rabbit hole watching every YouTube video Marie produced about journaling and daily task management in Notion. After a week or two of attempts to reverse-engineer some of the templates, Lucy made the jump and enrolled in Notion Mastery.

After joining the course, Lucy was thrilled to find others who loved Notion as much as she did, and who were interested in learning and building new things and geeking out about all of it.

Initially, having access to all the Notion Mastery templates seemed the most appealing. However, her opinion quickly shifted and she found that the office hours and live calls were the most appealing feature. Having a dedicated space to solve problems and test use cases live has been powerful, and she learns something new in almost every session.

A lot of online courses can feel very static—the information is there for the students to move through, and then move on from. With Notion Mastery, it feels as the whole team is dedicated to continuously iterating: adding new lessons or use cases, improving current lesson content, or connecting to their student community. I’ve been deeply impressed by their commitment to putting out the very best learning content for Notion.

The systems she has now built in Notion bring a lot of clarity to her work, helping her focus in on day to day tasks while keeping sight of her overall goals.

In mid 2021 Lucy set up a content dashboard in Notion to schedule and track all marketing and communications content she produces for her school. She has since sent approximately 90 email communications, published 16 blog articles, created 80 social posts, and published 8 major print publications. Having the Notion dashboard gives her valuable insight into what content they are already producing, and provides a clear pipeline to move ideas to publication quickly.

Right now Lucy’s focus is on her non-work life, and using Notion to support her family and personal hobbies. She has found that having a single place for family information in Notion lightens her mental load at home.

Don’t be afraid to dive right into the live sessions, show your work, and ask questions. The community is there to help you!

Lucy was featured on Keep Productive earlier this year. Check out the video below for a tour of how she is using Notion!

Ready to take your own journey into Notion Mastery?

Go through the core material at your own pace, with the support of live office hours, a helpful community forum, live trainings, and themed workshops.